“The chief enemy of creativity is good taste.” – Pablo Picasso

Write, Create things. There are no rules, and anyone who tells you that there are rules… Isn’t doing anything. But what do I know? Well, nothing. But I shouldn’t let that stop me from writing, or creating something.

My problem used to be I was worried about what people would think of something that I wrote. It would suck, or I’d miss spell a word, or screw up on grammar. Then they would come out of the woodwork! They would hunt me down with their torches and pitchforks. Sneering and pointing and laughing. I would get this in my head, and guess what would happen? Nothing. I would write nothing. Like most people I was asking for permission from people who usually didn’t exist, or just didn’t matter.

The most horrible times in my life were not when people were critical of my work. The times I felt the most horrible was when I wasn’t creating anything at all. When I was frozen because of something someone was going to say. I was forgetting the most important rule to being successful with creativity. Actually doing something creative!

So for a while now I have been taking my own advice. I write everyday. I try to be creative everyday. Some of the things I write might be shit, and some of it is going to be great. People don’t remember the shit anyway. I am showing up, and creating.

The Life of Ants 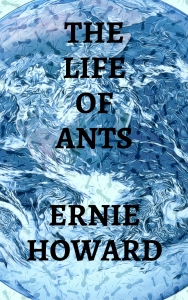